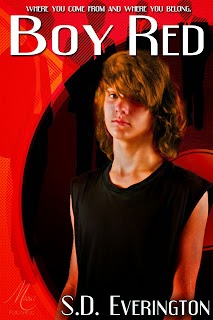 Boy Red is a story about identity, about where you come from and where you belong.

The day after his sixteenth birthday, Red discovers that the man he calls ‘Dad’ is not his biological father. Will Red be able to track down the anonymous sperm donor who gave him life? What will he learn about himself along the way? And just what else are his parents hiding?

First, let me say that I could not stop reading this book.

From beginning to end, I was engrossed with the story of our main character, Red. I found the story full of drama, love, angst, all of the things that would occupy the mind of a young teenage boy when the life he’s led for sixteen years disintegrates right before his eyes.

At the core, however, is Red, and Everington developed a character that I quickly latched onto and cared about, and because I cared so much for him, I had to read this book in one sitting so I could see how his story fared.

This is a great book not just for young adults but for adults as well.