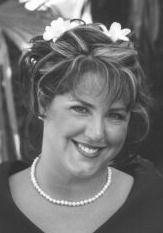 In 2006, NAL will release a book with a helluva title: Bitter is the New Black : Confessions of a Condescending, Egomaniacal, Self-Centered Smartass, Or, Why You Should Never Carry A Prada Bag to the Unemployment Office. Yes, that is the FULL TITLE. BITTER is Jen Lancaster’s memoir, a story of a woman trying to figure out what happens next when she’s gone from six figures to unemployment checks and she stops to reconsider some of the less-than-rosy attitudes and values she thought she’d never have to answer for when times were good. 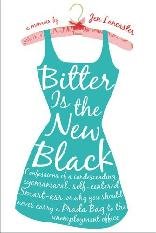 Jen, why did you initially begin writing your story, BITTER IS THE NEW BLACK? Was it to get published, or was there some cathartic reason?

Both, eventually. My book started from a blog I kept while my husband and I were unemployed and on the fast track from rich to poor. Initially I blogged precisely because it was cathartic – so many bad things were happening in my life and writing was cheap and easy therapy. What’s funny is that I never set out to write for an audience and a book deal was the last thing on my mind. I wrote for myself but didn’t realize at the time how many other people were going through the same thing in the post dot-com boom. Thus, my website attracted a lot of attention, eventually that of my literary agent. She was the one who approached me about a project. And since my background is in business, as soon as she started talking about my writing a book, I thought, “Wait a minute… I could possibly make money doing what I love? Oh, HELL YEAH.”

How long did it take you to write BITNB? Was it a frustration or smooth write for you?

The book sold based on a proposal and writing that took what seemed like forever, but was less than a year. Having such a thorough proposal made the actual writing process go by quickly. All in all, the manuscript only took a couple of months… best months of my life and I wish the process could have lasted longer! (Preparing and selling are what’s stressful – writing’s the fun part.)

However, there were frustrations along the way. When Publisher’s Marketplace announced my deal, a literary blog picked up the story and a bunch of mean bloggers declared the book to be crap. Perhaps they could have held their vitriol at least until it was written. I mean, how do you hate that which does not yet exist? Also, BITNB isn’t as fluffy as it sounds and re-living some of the rough spots was harder than anticipated. I found myself scribing those sections really quickly!

What are three “bitter” things will find in your upcoming book?

Getting fat, getting fired (OK, laid off, but the end result is still NO JOB), and getting f#&*ed over by a friend.

What I’m not “bitter” about is the help I’ve had along the way. If I didn’t have a phenomenal agent who knew just when to push and when to prod, I’d have given up ages ago. If it weren’t for the sacrifices my mother and husband made while I worked on the book, it never would have happened. In a lot of ways, I’ve been really lucky so I think it’s my responsibility to “pay it forward.” I do all I can to aid new writers along the path, whether it’s a quick edit, help with a proposal, or an agent introduction. (But it’s not purely altruistic – I always enjoy discovering a good new read!)

You’re a NanoWrimo Participant this year. For those who don’t know, that’s National Novel Writing Month. Can you give us a clue as to what you’re working on?

Sure! I’m working on a novel about a girl who for a variety of reasons has lost the ability to assert herself. It’s not about reinventing herself as much as it is about getting back to who she used to be. She’ll get her life on track with the help of another person who isn’t quite who she seems, which is part of the twist.

BTW, I’m really excited to be a NaNoWriMo participant – I’d been thinking about this story for a while but had no impetus to put it to paper. NaNoWriMo was just the kick in the pants I needed.

You’re using NanoWrimo to work on a fictional work. Has there been any huge differences or similarities between writing creative non-fiction and fiction?

Doing a memoir was easier in some respects because I already knew what was going to happen – I simply had to find a way to put my adventures into (what I hope is) an engaging format. For me, non-fiction is linear, A then B then C. I find fiction incredibly liberating because I’m not stuck recounting one story. Developing characters is a blast because it feels like the more I work with them, the more they hijack the narrative and take it an entirely different direction. That’s why I didn’t give the ending for my NaNoWriMo novel question – I’m waiting for my characters to reveal it to me!