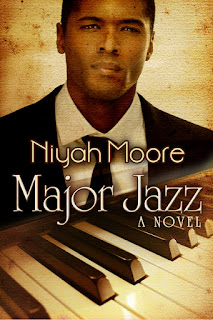 [Buy your copy of Major Jazz today from Amazon and the publisher!]

“Our heated passion created some of my best compositions, but I was cursed with my daddy’s blood.” Major Ingram knew better than to get into a committed relationship. As much as he witnessed the heartbreak his father inflicted upon his mother, he didn’t want to make the same mistakes. When his father finally walked out on them for good, his mother was broken. Something he saw and she felt for years. Major didn’t want to hurt any women that same way, but it seemed as if he could never tell Sallie Aquino he loved her because there was only one her and that was his music. Major’s father was a saxophone player who played the blues. He spoon-fed Major the love of music from the first day he opened his eyes to the world. Though the sax was in his blood, Major fell in love with the ivory and ebony keys the first time he heard a piano. Major developed his own passion with jazz music and by the age of sixteen, he had landed a paying gig at Bop City, an after hours nightclub in Fillmore. Fillmore, the ‘Mo, was like Harlem on the bay. Sammy Davis Jr., Ella Fitzgerald, Dinah Washington and Duke Ellington all fell into San Francisco the way they had in the Big Apple. Back in ’51, the Victorian styled homes, housed finely dressed black people who owned their own businesses from cleaners to restaurants to jazz spots. They worked mornings during the week and enjoyed local and celebrity musicians at night. Up and down Fillmore Street, clubs and restaurants lined up one next to the other. On Friday nights, they went from club to party to bar until the early hours of Monday while music played nonstop. Loosely based on true testimonies, the Fillmore Jazz Era comes back to life through the fictional characters: Major Ingram, Kae Taylor, Sade and Sallie Aquino, and Frank Blue. They made jazz heartfelt through their own stories. This love story just isn’t about falling in love, but how they each fell in love with a neighborhood, a scene and her, jazz music. The Fillmore Jazz Era is gone, most of the neighborhood was torn down by the Redevelopment Agency by the 1960’s, but it’s not forgotten, and the love for Bebop, Jazz, R&B, and Blues music that once existed remains in the heart and soul of Fillmore forever.

Watch the trailer for Major Jazz!

I could tell you what the book’s about, but I’ll leave that to the book description. Instead, I’ll tell you why I really enjoyed Niyah Moore’s MAJOR JAZZ: setting, character, plot, and sense of community. I love when I read a story in which the setting is an integral character, and in Moore’s novel, through her development of the 50s/60s jazz period that highlights the Fillmore Jazz era, readers are brought in to truly experience through all the senses a thriving time. The music, the atmosphere, the space all play an important role in how this story develops. Moore also paints wonderfully intriguing characters. What I love most about the characters? How each character’s dialogue distinctly sets them all apart. I can hear, feel the differences among them. From the start of the novel, Moore sets a great pace for her plot, and it’s a plot, a story that goes beyond just the dramas and conflicts of the characters to that of community and the importance of every facet of that community to an individual’s life. This is a novel that I could read again, and there aren’t that many of those in my collection. I’m definitely interested to see how Moore can top MAJOR JAZZ in her next novel.