Because writing is cheaper than therapy, I’ve learned to channel my aggression into stories. Yes, writers get angry and get their revenge in print.

But anger and aggression can only take you so far when it comes to telling a story — unless you’re writing a Taylor Swift song. To be honest with you, readers don’t really care that you and your boyfriend broke up and you created a character in his image to torture.

What’s the story about? Why is this character in these situations and how will he or she get out of it? What’s the hook to keep the reader invested in your revenge fantasy?

This is where you take off the angry Carrie Underwood hat and put your writer hat on (and yes, I have one).

Just because you want use your words to do things that would get you arrested, it doesn’t mean that the story you’re telling is meant for publication or to be shared. Not until you actually make the story work — in my Tim Gunn voice.

I just started working on a story about Cynthia Rose. She was kidnapped, raped, killed two people, and just recently got charged with murder. The idea for all of this came to me when I was on a test drive at a dealership and noticed one of the female sales consultants talking to two men and showing them the trunk. I immediately wondered, What if they pushed her in that trunk and took off?

It had been busy that day at the store, and I’m sure no one would’ve noticed for a while that she and that car were missing.

The easy story to tell would’ve been about a dead car sales lady and the search for her killers. That was the direction I was going, too. Then, Shonell Bacon sent out a tweet about the toughest situations that you’ve ever put your characters in. Cynthia’s plight was born.

Cynthia is proving to be one of my most challenging characters ever. She’s a victim, hero, and criminal all rolled up into one. Sometimes writing about her makes me cringe, cry, and laugh.

But she’s developed her voice, and I like where she’s taking me. That’s character development, and that’s what makes a book a page turner. 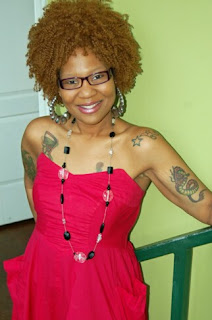 Cheris Hodges was bitten by the writing bug at an early age and always knew she wanted to be a writer. She is a 1999 graduate of Johnson C. Smith University and a freelance writer in Charlotte, North Carolina. A native of Bennettsville, South Carolina, Cheris loves hearing from her readers. Her novel Forces of Nature is in stores now, and Love after War arrives in November. You can learn more about Cheris and her books at her site and on Twitter and Facebook.