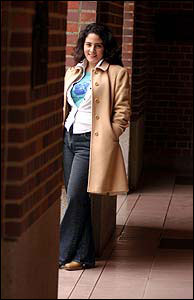 Photo by: Suzanne Mapes, for The Register

Pitch your latest novel, IN BETWEEN MEN to us in 50 words or less.

Just goes to show, you’re never done with pitching! Okay here we go: Single mom and ESL teacher Isa Avellan’s world is turned upside down when she’s been voted the un-sexiest woman alive by the entire student body. Suddenly, a soccer ball to the head gives her an unlikely guardian angel in the form of Joan Collins and then her ex-husband reveals every intimate, humiliating detail of their sex life to an infamous shock-jock . . . on national radio!

She takes matters into her own hands and submits to a total makeover, from lipstick to toenail polish to lacy lingerie. But the new Isa is about to find out that it’s not so easy juggling motherhood, career, and sex-symbol status.

What was the initial spark that created IN BETWEEN MEN?

Isa’s story evolved over many many drafts. The spark that really turned it around happened while I was in a meeting at work. Bored beyond belief, I thought what if her students vote her the unsexiest teacher alive? From there, it took off.

What’s the best thing about being an author?

Finally getting paid to day dream!

You write, as your site, marycastillo.com states, “sassy comedies for Avon Trade and Latina Lit for St. Martins.” In addition to those, you are also working on young adult fiction and a mystery series. Many people tend to stay within one genre, maybe two within their writing careers. What allows you to challenge yourself to write in a myriad of genres?

I’ll admit that I haven’t written them yet because I’ve been too busy writing my “chica lit” novels. Those stories and characters for the mystery (less so with the young adult) are rolling around in the back of my mind, but they haven’t demanded stories like the other characters.

In the past, has there been a struggle for you to get published because you’re a Latina writer?

When I first started writing in 1994, I remember my screenwriting teacher advising me to change my characters’ ethnicity. He said that there weren’t any big Hispanic actors to play the roles and my work had a greater chance of being produced if they were more neutral. Sadly, he was right. Look at how many movies are produced by Hispanics, about Hispanics. Not many.

I didn’t change them. I couldn’t.

When I was trying to sell Hot Tamara, I was told by non-Latinos that the book wasn’t Latino enough. Growing up, I usually heard that comment from Latinos!

What CDs are currently in your personal rotation?

Lately I’ve been writing without music. That’s a huge change for me. But I have a six-month old son who loves music, especially Johnny Cash, The Beatles and Ray Charles.

At your site, I read about your rejections and your determination to seek your goal of publication. Now that you have reached your goal and continue to forge ahead, what three pieces of advice would you offer to aspiring-to-be-published authors?

First, discipline protects the talent. You’re not a writer unless you’re writing. Second, don’t write to get published. Write to find your voice and hone your instincts. Third, join a writer’s association. The turning point in my career happened when I joined Romance Writers of America.

Lotion. I love scented lotions and I try to take good care of my hands.

What can we see next from you?

The first currently has no title and it’s a female buddy story. It’s about two best friends – a single girl looking for love and a SAHM looking for a way to balance her life – who each think the other has the perfect life. They switch bodies and then have to live each others’ lives till the next full moon. It’s about the grass not being so green and how even the
closest of friends can grow apart.

The second is part of an anthology titled, Other Names I Call My Sister. “Till Death Do Us Part” is about two sisters who are ostracized at their brother’s wedding and decide to play a game as to who can land the blue-eyed hottie at the bar. They realize that the hottie may or may not know a secret about their bitchy sister-in-law.

The new proposals that I’m about to start working on this weekend!