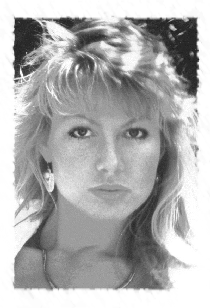 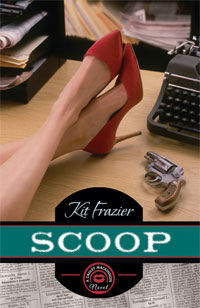 Pitch your novel in 50 words or less:
Obituary writer Cauley MacKinnon wants the scoop of a lifetime, but when a friend dies of a suspicious suicide, Cauley finds herself up to her eyelashes in dead bodies, on the run from an earless maniac and on the lookout for a hot FBI agent she’s sure has the answers.

What’s one thing you learned in the writing of this novel?
Oh, gosh, what a great question. I learned a lot of things while writing this novel. I think the biggest thing was the importance of friends, especially friends who write. Writing is hard—if it was easy, everyone would do it, and on those nights when you’ve had too much bourbon and Diet Coke and you’re convinced the novel is crap, friends will convince you that you say this in the middle of every novel, award-winning and otherwise, and will stop you from stripping naked, dousing the damn thing with lighter fluid and dancing around the resulting bonfire in your backyard.

I’m currently reading SCOOP—love it by the way—Cauley is a gritty, feisty chick, and I dig it! One thing I noticed about the novel is that you made sure to integrate femininity to your main character, Cauley. It would be, I assume, so easy to focus on the plot at hand, which is intricate, and totally forget that Cauley is a woman who loves shoes and men, among other things. How important was it for you to show Cauley’s multi-faceted personality?

Thank you! I hope you like it have as much as I enjoyed writing it!

As for Cauley, it was very important to me that Cauley was a real woman. My mother was a policewoman in the late 70s, and I remember how difficult it was for her to fit into a profession so pumped with testosterone. Under her uniforms (which I had to iron when I was a little girl, by the way), she always wore frilly panties and bras, and she had a closet full of killer shoes. Later, I took cues from her when I became a reporter, and was usually the only girl in an office full of men.

What are some of the themes you tackle in SCOOP?
The main theme of SCOOP is making mistakes, accepting the consequences, forgiving yourself, and moving on. It was important to me that Cauley makes some big mistakes, but she bounces back—she takes her bruises and moves on and is usually, hopefully the smarter for it. I think so often we keep making the same mistake over and over again (I certainly have and usually it has to do with the male of the species) and we repeat it until we learn the lesson from it.

Tell us about your journey to publication (from getting your agent to getting a book deal).

Oh, boy. My family is a big bunch of storytellers, so I began reading, writing and telling stories at an early age. I was a reporter, and Julie Ortolon, our graphic artist, was writing a romance novel (she’s now a bestselling romance author—check her out at www.Ortolon.com). We became friends, and she suggested I go with her to her romance writer meetings. I did, and I wrote a romance—it won every contest in which it was entered, and got me a meeting with a couple of agents, including one at William Morris. The agent told me she loved my voice, my sense of humor and loved my characters, but could I get rid of the baby and the man?

I said, “Well, no, but I could write you a new novel.” On the way home from that meeting, Cauley MacKinnon came to me whole and fully formed, ready to tell me her story. I pulled in the driveway, ran into the house and wrote the first 60 pages that night, and I knew…I just knew Cauley was my girl.

SCOOP won a litany of contests, including the Writers’ League of Texas and the Merritt. I got several agent interviews but chose Andrea Somberg. It was funny, though, because I was SO nervous when I met her because I’d heard so many wonderful things about her and I knew she was the agent for me, so I memorized my one sentence pitch, my short bio, my career goals and her client list. Andrea had actually judged the contest, so she’d read the first 20 pages, and when I went in for my meeting, she started the conversation by saying she loved the book, said she read it to her boyfriend, and actually quoted parts of it back to me. I was floored. So, I signed with her and a great friendship and agent/writer relationship was born.

Cauley made the rounds at publishing houses, and three editors fought hard for it, but they didn’t know where to put—is it a mystery? Is it a romance? Poor Cauley got smacked down in marketing every time. Two of those editors said that if I would change this one thing (Cauley sleeps with a charming, sweet talking bad guy who is not the hero), I’d get the green light. But that relationship is important to Cauley’s character arc, and it’s important to the series. And then came Barbara Moore at Midnight Ink, who loved the book and believed in the series in me so much they sent me to Book Expo this year! Talk about feeling like Queen of the Universe. My books were all gone before the Expo was over, and I’m still getting mail from people who got the book there and read it. It’s been a fantastic experience, and Midnight Ink has been very good to me.

As a published author, what types of things do you do to help push your work?
I’m very proactive with my career. I speak at conferences, write press releases, I visit booksellers, I made some really cute handcuff key chains to give to booksellers, and hired a publicist who targets booksellers. I also write writing-related articles, because most writers are readers. Midnight Ink took out a couple of ads, and I’ve taken out a couple, but I also go to non-writing related functions, such as women’s conferences, chamber of commerce meetings, Search and Rescue conferences and anything that has to do with the book’s subject matter. Networking and word of mouth is super important.

I am also doing a free 30 minute “teleconference” with reading groups who chose SCOOP as their book choice.

But one of the best things and by far my favorite, is mentoring. I don’t do it to push my career, but because there were women who helped (and are still helping) me. I think it’s very important for women who are climbing the ladder to give our gal pals a boost up the rungs whenever we can.

On a more quirky note, I also wear a tee shirt that says, “Warning: Be Nice To Me. What You Say & Do May Wind Up In My Next Book, www.kitfrazier.com.”

What three pieces of advice would you offer to aspiring-to-be-published authors?
I know you’ve heard it before, but write, write, write. It’s also important to learn the basics of writing and publishing, read a lot, and hang out with other writers, even if it’s online. But most important is to apply butt to seat, fingers to keyboard, even when there’s nothing but crap coming out. The muse has to know where to find you, and if you’re at the keyboard, she’ll show up…

Are you an outliner or a jump-in-and-see-what-happens type of a writer? Why?
Oh, I’m sorry, I just heard hysterical laughing in my head. Yes, I outline. But it never goes the way I think it’s going to go. All of my friends have these elaborate outlines, and they know just what’s going to happen next, which makes me insanely jealous. Of course, they’ve also got their spices arranged in alphabetical order and shop with grocery lists.

Do you have a writing routine? For example, do you write every day?
Sorry, the laughing is still echoing. It drives my friends and family crazy, because I need to get on some sort of routine, but I carry a little notebook with me to jot down ideas, snippets of conversation, characters, etc. I wish I had a more regimented schedule, but what usually happens is I write in big bursts at the beginning of every day so that my first, best energy goes into the book. I also keep a little light pen and a notebook by my bedside, because my muse won’t leave me alone at night and whispers the best ideas while I’m trying to go to sleep. The light pen and notebook save me from scrounging around, tripping over the dog to scribble illegible notes with lipstick on a cocktail napkin…

How do you spend your time when you’re not writing?
I assume we’re not talking about the day job, where I’m the editor of a regional magazine…For fun, I spend time at the lake with my dog, spending time (also with the dog) at the family ranch with the cows, goats and barn cats, and I spent a disproportionate amount of time and income going to lunch with my friends so we can all complain about writing. We really are a bunch of whiners…

What are you currently working on?
I am finishing DEAD COPY, the second in the Cauley series, and I hate to jinx it, but I’m loving it and think it may even be better than SCOOP. I’m also working on a short story and outlining *snort* the storyline for MORGUE FILE, the third in the series, where Cauley’s horrible ex husband comes back and tries to ruin things for her and Logan, and I’m loving the book already.

I’d like to have time to paint and sculpt again, and I’ll get back to it sooner or later. I’ve got a couple of ideas for paranormal books, and I’d love to write a memoir, but there are a couple of people who probably have to meet The Maker before I start that one…