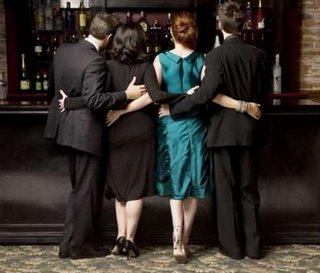 Eight years ago, I sat and laughed my ass off as Jack sang “Blame It on the Bossanova” in the first episode of Will and Grace, or when Jack and Karen belly-touched. Eight years later, W&G said goodbye to us, and it was a great series finale. I loved how they fast forward through the characters’ lives and gave us a glimpse on how everyone turns out and more importantly, how everyone is still together. All week, I thought about not watching the show. I knew I would cried until I got sick. I’m the emotional kind and that’s what emotional kinds do. But alas, I only cried once–the song between Karen and Jack and the belly-touch were priceless and touching and moving, and I could see how emotional they were to be ending the show.

Some might say it’s funny to cry over the end of a show, but I would disagree. It’s much like graduating from high school or college and knowing that you’ll never see all your “friends” again because you’ll move on and do your thing, and they will move on and do their things, and never the two shall meet again. Also, in our media-crazed, needing to know what everyone is doing world, is it any wonder that people might create emotional ties to characters that hold glimpses of themselves, characters whom people invited into their home once a week, for eight years? Hell, I don’t see some of my good friends that often.

So, I will admit that I’m sad to see my friends go, just like I was when my six “Friends” left NBC. All my other favorite shows are action packed and many of them do not tap into character like W&G did, so I’ll be lonely for awhile until television decides to veer away from reality and action, action, action, and give me a good show full of great characters to occupy a part of my life.