This month, your latest novel, THE SWEET SPOT is due out! Describe it in 50 words or less. 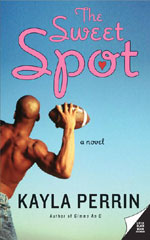 THE SWEET SPOT is a story of how opposites can clash–and spark a fierce attraction! Kahari Brown is a star running back for the Oakland Raiders, a man at the top of his game. Until he meets Zoe Andrews, an aspiring sports reporter. She is willing to do anything to get her big break…even if that means digging up a little dirt on Kahari. Sparks fly!

What’s your favorite thing about this novel?

When I had to re-read it during the page proof stage, I really fell in love with Kahari all over again. But I think what I like best is how vulnerable and honest Zoe is. She’s far from perfect, has her share of mishaps and bad luck. While she’s desperate to get her big break, she has a heart of gold–and has to question how far she’s willing to go to realize her dream. So, I guess I really love Zoe’s character.

What CDs are currently in rotation in your personal CD player?

You recently kicked off Harlequin’s new line SPICE with your novel, GETTING EVEN. Do you plan to write more novels within the romance-erotica genre? 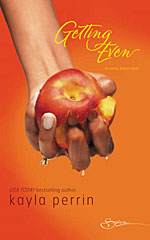 Yes. In fact, I signed a 3-book contract with Harlequin. The follow up to GETTING EVEN is called GETTING SOME, and it comes out next March!

You are, in essence, an eclectic writer, having written romance, romantic suspense, mainstream, now romance-erotica. What contributes to your ability to tell stories in a myriad of genres?

All my life, I’ve been the kind of person who has been interested in a variety of things. I could have been a lawyer, a teacher, a filmmaker… I guess I don’t want to feel tied down to any one thing, even when it comes to writing, and I’m happy to explore new territory while keeping one foot planted on familiar ground. I also find that writing different types of stories allows me to feel excited about going back to something old. Like writing traditional romance. I haven’t done that in a while, but was just offered a contract to do a romance title, and I was excited about that. Writing different kinds of stories helps me not to get bored.

What can fans expect to see from you next?

Next, I have a novella called “Mama Knows Best” in the chick lit lit anthology, THIS IS CHICK LIT. It comes out in September. After that, an older title of mine, HOLIDAY OF LOVE, is being re-released by Harlequin’s Kimani Press in November. In January, my newest for St. Martin’s will finally be released, a suspenseful story called WE’LL NEVER TELL. I think I have 5 new releases scheduled for next year. Actually, 5 novels and 1 novella.

What’s the best thing about being a published author?

I get to work in my pajamas! Seriously, I love working from home. It allows me a lot of time to be with my daughter, though she distracts me from writing–a lot! It also allows me to travel as much as I want.

The worst thing is that when you work from home, there’s no one standing over you expecting you to produce. As a result, I can procrastinate a lot…which leaves me frazzled and sleep-deprived close to my deadlines.

What are the three best pieces of advice you’ve received from people within the industry?

Write what you know, be willing to take constructive criticism, and never give up.

Dream-on: You’ve been given greenlighted to do any creative project you want. What project would that be?

Right now, that project would be a feature film. Since I have worked in the film business, this has always been a dream of mine. I’ve put it on the back burner, but now the flame is starting to grow again. I think I’d do a romantic comedy!

Learn more about Kayla and her bevy of work at her website!