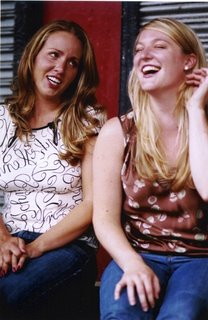 IN THE KNOW WITH LIBBY STREET

Title of your new book: Accidental It Girl (Downtown Press)

Tell us about your journey to publication. (How long did it take you to write your first novel? How long was it from creation to representation to publication?)
Our first novel, Happiness Sold Separately, was an interesting journey. We began writing without any real goal in mind (for around a year). Of course, we hoped it would be published, but mostly Sarah and I just wanted to see if we could do it. When we finished a first draft, we were happy to discover that there was actually a novel in there. So, we spent about six months refining and polishing the manuscript, preparing it to send out to agents. We did a ton of research and made a long list of agents to query about representing us. We got extremely lucky and found a fantastic agent after our first batch of four query letters. It was an astoundingly short leap to having a publisher, and the whole process really went full tilt. From inception to publication it was about two and a half years, give or take a month or two.

They say two heads are better than one. Would you agree as you have published two novels as Libby Street?
Yes, I would say that two heads are better than one. At least, it works out that way for us. The best part is that, unlike some authors, for us there’s no such thing as writer’s block–or even exhaustion. We each write till we can’t write anymore and then pass it on. When I’m spent, Sarah takes it and does her thing and vice-versa. So someone is always working on the book at all times. It’s also great to have another brain on any particular story problem. We’re constantly amazed at how we can be so similar and yet, when it comes down to story, one or the other of us will always come up with something that the other person hadn’t thought of.

What’s the process? How do you, as Libby Street, go about developing an idea and writing the book?
Well, the central idea, or spark, of the story comes from one of us. (For example, the idea for Accidental It Girl came from an idea I had many years ago–before Happiness Sold Separately, in fact.) We talk about the characters, the situations, and themes. Then, we work up an outline that both of us are happy with and start writing. In the writing stage, we each write a chunk then pass it on to the next person who reads it, edits it, and then adds on and passes it back. Of course, even when we’re individually working on a section we end up calling the other person to bounce ideas around.

I want this; no, I want that. Do you ever argue over what to keep and what to trash while writing a novel? For example, if one of you wrote–in her opinion–a brilliant scene and the other wants to cut it, does that cause friction in the writing process?
Actually, Sarah and I have had very few–if any– arguments about those things. When we do have different ideas of how something should go, we talk it out. Through our discussion, we always seem to come to a mutually agreeable decision on which direction to take. Often, we’ll come up with yet a third idea that
we’re both excited about.

What three pieces of advice would you offer aspiring-to-be-published authors?
Well, first I would say read everything you can get your hands on. Read in your genre, outside your genre, the classics, and tons of writing books and books on the industry.

Second–a piece of advice I got from my college mentor and first writing professor–get your butt in the chair. That means, just sit down and do it, no matter what. No one’s going to write that book for you.

Third, don’t give up. If your first attempt at a novel goes over like a lead balloon, well, write another one. If you want to be a published author, don’t stop until you are one.

What are you currently working on?
Sarah and I are working on a really fun story idea that’s a bit of a new direction for us. It’s more of a Young Adult novel, but we hope that our loyal 20-something girls will like it, too.

A MOMENT WITH EMILY

If you could only use 25 words to pitch Accidental It Girl, what would you say?
Oh, boy this reminds me of an exercise my profs made me do in film school–create a movie poster tag line. Okay, here we go: A female paparazzi and one of Hollywood’s hottest bachelors lock horns and discover just how thin the line between love and hate can be.

Woo hoo! With one word to spare!

How do you spend your time when you’re not writing?
Well, besides the stuff you can probably guess–like reading–I am very lucky to live in a veritable natural wonderland (the East End of Long Island), so I spend a lot of time with nature. Not actually mingling with it, you understand, but lounging on my rear looking at it. When I’m not gazing at the sea, you can find me watching an obscene amount of TV and movies. Or, pathetically enough, playing Sims 2. (I am a major nerd.)

What three adjectives best describe you?
Tenacious
Hard-working
Fierce (okay, sorry that last question got me thinking about America’s Next Top Model which is on in a couple of hours) Hmmm, a third adjective . . . how about crafty. Not in a “those criminals are crafty” kind of way, but like a “Wow, Emily, that pinecone Christmas garland you made was really crafty” kind of way.

Word association. What comes to mind when you read the following words:
Best Friend: Sarah
Writing: all the time
Hollywood: sign
Paparazzi: fascinating

A MOMENT WITH SARAH

What’s your favorite thing about Accidental It Girl?
Well, it’s a cross between the male lead Ethan Wyatt – I love him very, very much – and the research we got to do for the book. Imagine having the freedom to read tabloid after tabloid and never having to feel guilty or embarrassed. No one could make fun of me because it was all in the name of research! It was heaven.

If you could only use 25 words to pitch Accidental It Girl, what would you say?
This is always the hardest part for me, but here it goes: A female paparazzi and a Hollywood bad boy get a lesson in how opposites attract.

How do you spend your time when you’re not writing?
Starting tomorrow, I’ll be spending my time in India. For two whole weeks. I’m ecstatic! The rest of the time I am an ad exec. That’s not really as exciting.

Word Association. What comes to mind when you read the following words:
BEST FRIEND: Emmie
WRITING: When’s it due?
HOLLYWOOD: cocktails in the afternoon
PAPARAZZI: flashbulbs

To learn MORE about Libby Street, you can visit their WEBSITE, or you can check them out on MYSPACE!