Title of your latest novel: One on One 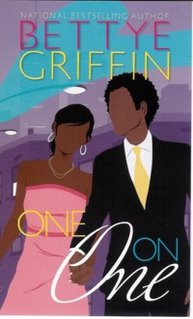 Pitch the novel in 50 words or less.

Love post 9/11. The heroine lost her husband that day. One of the husband’s last requests was asking his stepbrother to take care of his wife and children. In doing this, the stepbrother falls in love with her. Guilt drives him away, but three years later he returns, only to find his feelings haven’t changed.

What’s your favorite thing about this novel?

The setting. I tagged along while my husband did some consulting in the Greenville/Spartanburg area of South Carolina, and I thought it a lovely place. I guess I’m partial to mountains.

Since 1998, you’ve been a writer of romance novels; last year you published your first mainstream novel. What was the transition like?

It feels like I can breathe. The rules of romance get more constricting all the time (and many publishers have the exact same ones.) In mainstream, anything goes. The books I’ve had published so far (The People Next Door, Nothing But Trouble) don’t even have romance in them, so I really feel like I’ve switched genres.

Do you plan to write other mainstream novels? If so, any in the foreseeable future?

Absolutely. I’m not about to give up all this creative freedom. Look for If These Walls Could Talk in June 2007. It’s available now for pre-order on Amazon.com. I’m already working on the follow-up to that, but since I haven’t gotten an official green light from a new, very backed-up editor, I won’t say anything else about that.

In response to popular demand for sequels to The People Next Door and Nothing But Trouble, I’ve started outlining a story that will combine the two “bad girls” from each, pitting them against each other. All I can say is don’t hold your breath; this is bound to take some time.

I’ve read several of your books, and one thing I love about them is that you tackle real-life concerns in them, such as divorce, infertility, love between different classes, and family values. What do you think compels you to not write the “fluffy sweet” romance and to integrate your romance into stories full of realism?

Several? While haven’t you read them all? (smile) I like happy endings as much as the next person, but I’m just not a fantasy type of gal. Some of the traditional romances strike me as sappy, full of stereotypes like petite heroines who always wear heels, even if they’re going on a hike, etc. I did write one romance with a Cinderella theme (From This Day Forward,) and while many readers enjoyed it, others complained that it took too long for the romance to develop. I didn’t feel it was realistic for strong feelings to be present from the start from two individuals with such vastly different backgrounds (the hero was a TV journalist, the heroine was po’,) at least not on his part.

You’ve been a published author for almost ten years – what are three things you’ve learned about writing, about publishing that you believe all aspiring writers should know coming into the game?

1- That there’s a heck of a lot of competition out there, so make sure you’ve dotted your I’s and crossed your T’s. Good writing helps, too. There’s a lot of stuff out there now that I personally don’t believe would have been published if the authors didn’t have good track records.

2 – Watch out for editors and agents who only want to see ghetto fiction (unless, of course, that’s what you write).

3 – There are no short cuts. Period. So don’t get started unless you’re prepared to do the work.

I know novels are like children – every book in the author’s eyes is beautiful, but if you could pick, what three books were the most fun to write and why?

Prelude to a Kiss was a lot of fun because it was a romantic comedy and just a fun story. I also got a kick out of The People Next Door when writing about nosy neighbors and their antics. And I enjoyed writing Where There’s Smoke because (I hope) it gave single mothers hope that their prince awaits.

I can’t tell you that, because I still hope to get a green light on it!

If you want to learn more about Bettye and her books, check out her WEBSITE. Bettye also has a blog: Chewing the Fat with Bettye!