Stacy-Deanne is dropping two releases this month, and she’s offering tasty excerpts to whet your appetite and to buy, buy, buy! 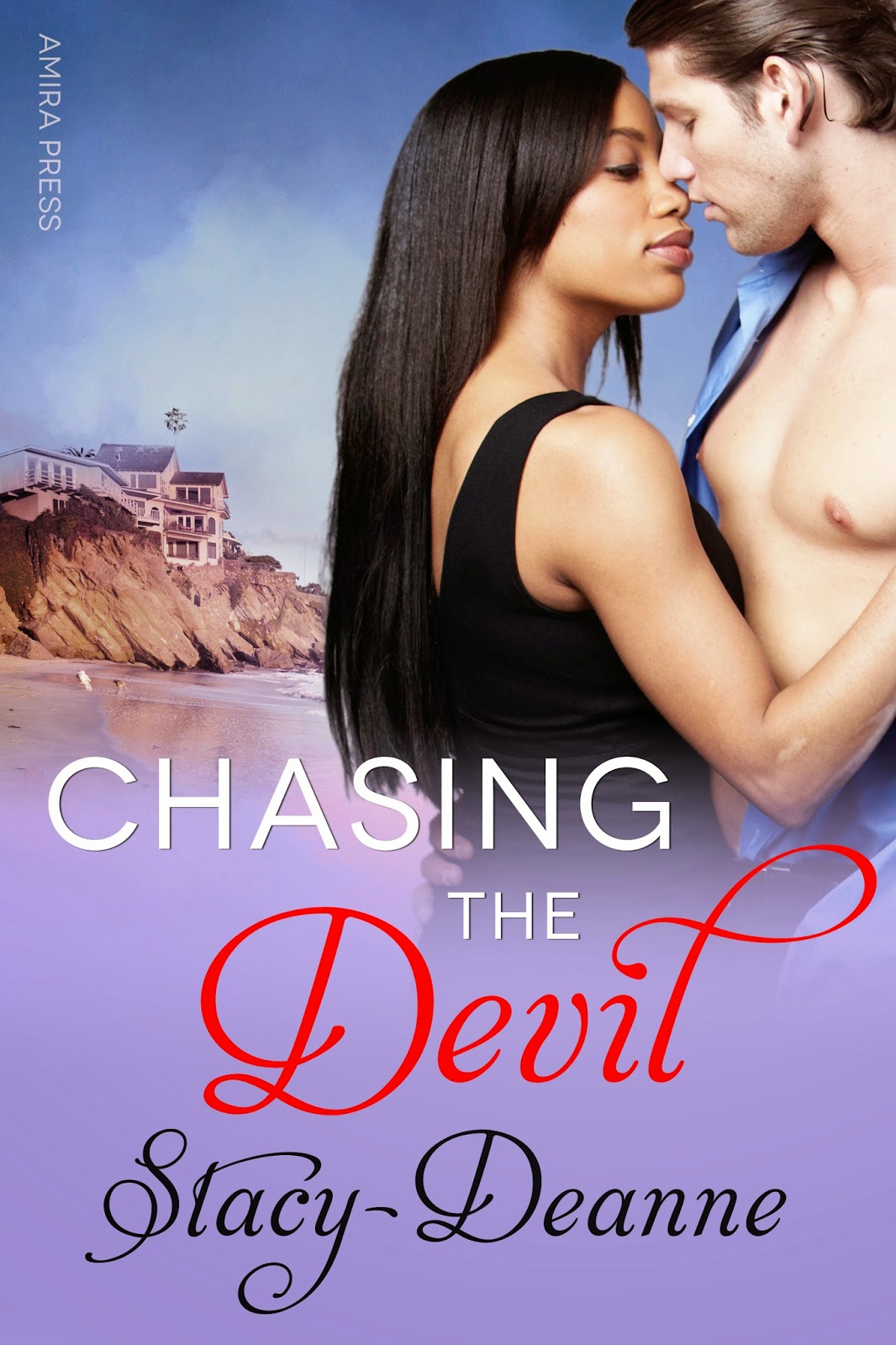 Tate Valley, California Detectives Alexis Adams and her partner Penelope Dao embark on the most bizarre murder case of their careers when rich boy Donovan McCoy is shot to death while trying to rape 18 year-old Rose Malone on the beach just blocks away from Alexis’ home.

The investigation quickly spirals out of control when Donovan’s father Benson vows to take matters into his own hands if Alexis and Penelope don’t deliver results. Soon the detectives find themselves in a web of confusion and lies, and they wonder if they’ll ever get to the truth.

Meanwhile, Kevin and Alexis’ relationship turns hotter and heavier, yet the closer they get, trust continues to be an issue. Kevin wants to give Alexis the world, but she has to trust him enough to give him her heart in return.

Kevin promises to stand by Alexis’ side with her plan to expose Grant Copeland. But, chasing the devil could be hazardous to her health.

Alexis walked down the dark halls of Copeland Enterprises later that night. She turned the corner, smiled at the maintenance man, and stopped at the parted door of Kevin Reed’s office.

There were no words for how crazy he made her lately. She’d be on a murder case, questioning a witness, yet all she could think about was being in his arms.

She closed her eyes and imagined smelling his cologne and getting lost in his captivating kisses.

They’d only made love six times and just when she thought she couldn’t come harder the next time or that she couldn’t get any wetter, her body proved her wrong.

She grabbed her breast.

She’d had desire for men before, but none satisfied that emotional and physical ache the way Kevin did. She’d never experienced this type of need or hunger for a man before.

She let go of her tingling breast.

“You just gonna stand there all night?” Kevin sat at his desk in another one of his famous designer shirts and ties. His shiny dark hair complimented the gray of his eyes.

His intoxicating cologne grabbed her from across the room.

He loved that cologne and she loved it on him.

She could die in that scent.

“To what do I owe this pleasure?” He leaned back in the chair with his diamond watch catching the light.
She walked inside and closed the door. “I figured you were working late again.” She glanced around his office.

“Did you know I’m psychic?” His handsome face lit up. “I bet I can tell you what’s gonna happen in here.”

“Yeah. We’re gonna have the best…” He threw his pen down. “Sex you’ve ever had in your life.”

“Yep.” He stood. “First we’ll start on the desk, then we’ll end up against the wall.” He pointed to that empty space between the window and bookshelf. “And then we’ll end up on the floor.” He walked from behind the desk. “Tell me I’m not psychic.”

Alexis took her blazer off and laid it on one of the chairs in front of his desk. “Just because we can’t seem to be in the same room five minutes together without getting it on doesn’t mean the same thing’s gonna happen tonight.”

He leaned against the front of the desk with that devilish stare. “All I have to do is look at you and your clothes fall off.”

That mesmerizing tingle hit her between the legs.

“So why don’t you come over here?” He held out his arms. “Or do I have to chase you around this room?”

“I have to tell you something. It’s serious.”

Kevin put his arms down.

“Donovan McCoy, Benson’s son, was killed a few hours ago.”

“I just came from the McCoys’.” She walked around. “I don’t know what I hate about being a homicide detective more, finding someone dead or telling the loved ones.”

“What the hell happened?”

“It happened on the beach down from my place. Donovan tried to rape Rose Malone.”

“What?” He breathed into his palm. “That’s horrible. Rose is such a sweet girl. How old is she now?”

Kevin grimaced and shook his head. “This might be fucked up to say, but Donovan was an asshole just like his dad is.”

“What do you mean?” She walked back over to him.

“He was one of those guys who thought because his parents were rich that he could treat people like shit. Benson’s the same way. He’s always thought his money made him invincible or better than everyone.”

Kevin leaned to one side. “It’s horrible that Donovan would do something like that to someone as sweet as Rose. She didn’t deserve that.”

“No one deserves to be raped.”

He clasped his hands. “So did she kill him in self-defense?”

“She says she didn’t kill him and all we have is her word for now.” Alexis took her hands out of her pockets. “You won’t believe what happened. As long as I’ve been a detective I’ve never heard shit like this.” She touched the side of her head. “While Donovan was trying to rape Rose, she said someone else shot him from down the beach.”

“Donovan fell over and the person ran down the beach. “Now have you ever heard something that damn bizarre?”

“It’s obviously not random.” Kevin got off the desk. “I doubt someone was just strolling on the beach, came across Rose and Donovan, and shot him.”

“Penelope and I wondered if it was just some innocent bystander who saw Donovan trying to rape Rose, shot him, and ran off in fear.”

Kevin scrunched up his face. “I’d think a Good Samaritan would’ve stayed with Rose and told the cops the truth.”

“I agree.” She bit her lip. “This person knew Donovan or Rose, I just have that feeling.”

“So do you have any leads?”

She ran her fingers through her hair. “We found a shell casing for a thirty-eight, so I guess that’s the weapon we’re looking for.”

“I don’t suppose Rose had any idea who would do this?”

Alexis shook her head. “Poor thing was shaking out of her skin.”

“Aw.” He walked up to her and caressed her arms. “Sounds like you had a rough night, hmm?” He unbuttoned her blouse.

“You know how it is when we get together.” He slipped her blouse off her shoulders and threw it to the floor. “We just can’t seem to keep our hands off of each other.” He sucked her neck.

“Oh.” She melted when his warm tongue touched her skin. “This is crazy.” She shoved her fingers in his hair.

“Then be crazy, Lexi.” He unbuckled her belt. “Be crazy.”

She pulled him to the floor. 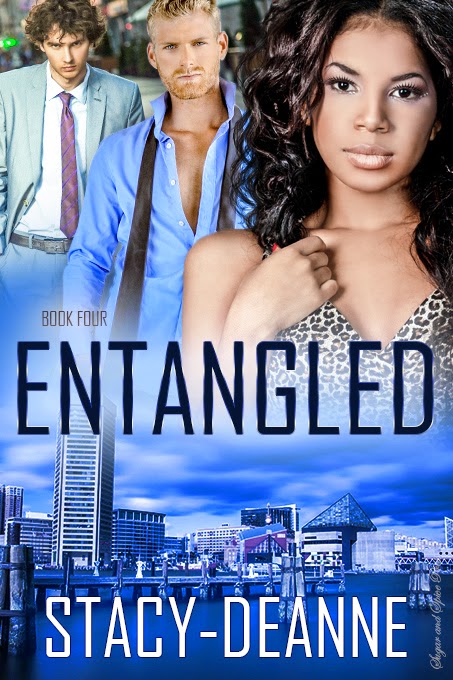 Entangled (Book #4 in the Bruised Series) coming from Sugar and Spice Press June 21
[Sugar and Spice Press]
Book will also be available at Amazon, Barnes & Noble, All Romance, and Bookstrand. Check out Stacy-Deanne’s website to be kept abreast of purchase availability.

When local mystery author Grayson Paul’s ex-wife is murdered, Baltimore detectives Lisa Swanson and Dee Quarter are thrown into the most complicated case of their careers. When the officers first meet Grayson, Lisa is convinced he’s hiding something while Dee, who happens to be one of Grayson’s biggest fans, is immediately taken in by the older gentleman’s good looks and charm.

What starts off as innocent flirtation between Grayson and Dee turns into a steamy affair which leaves Dee torn between guilt for sleeping with a man she doesn’t love and her torturous infatuation for Detective Winston Lewis. Winston, who’s deeply in love with Lisa, refuses to accept Lisa’s decision to be with Jake Jenson. Meanwhile Jake’s jealousy of Winston becomes so out of hand that it threatens to destroy his relationship with Lisa forever.

Between forbidden attractions, self-destructive decisions, and determined suitors, Lisa and Dee manage to solve the case. Before it’s over they’ll both get a crucial lesson in life and love that they will never forget.

“Ah, jeez.” Dee stopped and turned around when she saw Winston in the station workout room.

“Hey.” He finished the sit-up then jumped to his feet. “What’s your problem, Dee?” He yanked a towel off the shelf.

She faced him. “What are you talking about?”

He grabbed his water bottle from the mat. “Why did you turn around when you saw me?” He opened the bottle and sipped.

“It’s just that I didn’t expect to see you in here.”

“And why not?” Sweat ran down the tight, black tank that hugged his scrumptious pecks.

“Oh I don’t know.” She swung her hand. “I thought you’d be somewhere running after Lisa, like always.”

He scoffed. “And why are you mean? Well, I mean today?”

“Honestly?” She straightened the towel on her shoulder. “Because you’re the last person I wanna see right now.”

“And what did I do to you?” He dabbed his face.

“You exist.” She yanked the towel off her shoulder.

“You’re such a bitch.” He wiped his forehead. “You think you can just say whatever you want to people and that they don’t have any feelings.”

She put her hand in his face. “Did I give you any indication that I wanna hear your whining right now?”

“In case you’ve been living in a box somewhere, I’ve had the day from hell.” She stomped toward the exercise bike. “All day Connie-big-mouth Allison, and that fat ass Belinda have been snickering and laughing behind my back and I’ve had it.” She threw the towel on the floor and got on the bike. “I thought this was a police station and not high school.”

“Because it’s because of you that they’re doing this.” She pedaled. “God, Winston, you’re a cop. You should be able to get a clue.”

“Hey, I haven’t exactly had the best day either.” He stood beside the bike. “As for Connie, I know exactly what you mean. Every time I turn around someone is giggling in my face and whispering.”

“And you brought it on yourself.” She pedaled faster. “I told you people were talking about you and Lisa but you took it as a big joke.” She gripped the handlebars. “What I can’t understand is why are they acting so weird with me?”

She trembled from his touch but she sure as hell wouldn’t let him know it.

“We need to settle this,” he said. “What’s going on? If I did something to you please tell me what.”

She sighed and stopped pedaling. “You didn’t do anything. I apologize for taking my frustrations out on you.”

“But why are you so frustrated? Is there something I can do?”

You can throw me down on the mat and make love to me as if we’re the last two people on earth. That’s what you can do.

“Dee.” He put his finger under her chin and turned her face until their eyes met. “I’m your friend. You know that, right?”

“Now I know we get into it with each other from time to time, but you know I care about you.” He stroked her ponytail. “You know if you need to talk about anything then I’m here.”

She got off the bike. “Winston. I have to…” She lost herself in his stare. “I have to tell you something.”

“What?” He moved closer.

Don’t you dare do it.