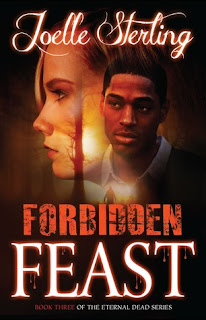 In the town of Frombleton, government and law enforcement are run by vampires, and humans can’t get justice—particularly after the sun goes down.

Holland Manning has been studying witchcraft at the elite Stoneham Academy. Having reached the rare pinnacle of Witch of the First Order, Holland is the only human who has the power to thwart the vampires’ heinous designs. She alone can save the town’s residents.

While devising a plan to overthrow the vampire regime, Holland is appalled to discover that another threat to humans has found its way to Frombleton: a growing band of ravenous zombies are prowling the streets, devouring the vampire’s food source and challenging their seat of power. And to Holland’s horror, at the helm of the marauding flesh eaters is the recently returned love of her life, Jonas!

No matter who wins, the human race is doomed unless Holland can make the arduous decision to choose victory over love.

Purchase your copy of Forbidden Feast TODAY through one of the following outlets: Amazon, Barnes & Noble, Books-A-Million, IndieBound, and Bookish.