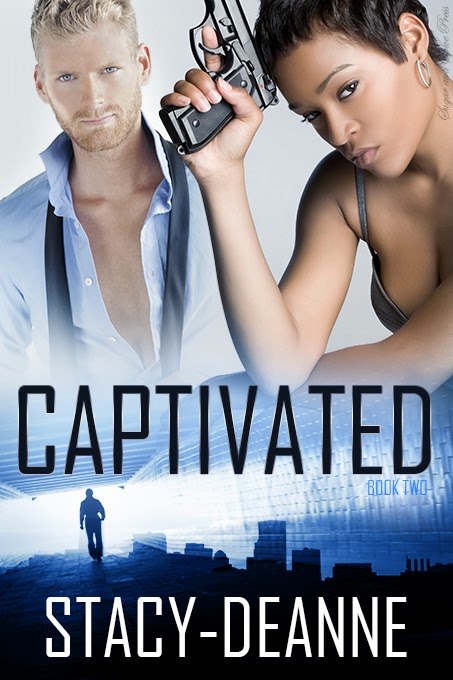 CAPTIVATED is Book 2 in the Bruised Series

Synopsis:
When she first lays eyes on Mya Riley’s slashed up body, Baltimore Detective Lisa Swanson is certain that the Sandman, a ruthless serial killer from her past has reemerged. Lisa dives headfirst into the case with her partner Dee, and lovesick Winston Lewis, a detective who grows more captivated with Lisa by the day.

The Sandman wreaks bloodthirsty havoc throughout the city, and this time he is determined to make Lisa his victim.

Armed with intense hatred for the Sandman and a stifling fear of who might end up dead next, Lisa struggles to solve the case by the book. But when the Sandman switches up his plan and goes after her lover Jake…Lisa ignores all the rules.

|||||||
Excerpt from Captivated
“There’s a song stuck in my head.” He hummed it. “I was listening to it earlier but can’t think of the name.” He swayed Lisa while he hummed. “It’s been a while since we danced.” He twirled them around in circles.
Lisa laughed. “Whoa! You’re putting all the moves on me.”
“You always like it when I do this.” He lifted the front of his wheelchair off the floor and came back down. “You like that, huh?”
“Whoa!” She laughed. “You’re right. It’s been a while since we went dancing.” She put her hand in his as he swerved them across the kitchen. “So we can go dancing then.” She lifted her head from his shoulder. “We could both use a break, don’t you think?” She played with a button on his shirt. “We can go to the Rush.”
He rolled his eyes. “How come we always go to the wheelchair nightclubs?”
“I thought it was your favorite place. I just want you to be comfortable.”
“I want us to go dancing for real.” He laid his arm on the armrest. “I used to love dancing.” He got teary-eyed. “I miss that the most.”
She kissed his hand.
“I wanna take you dancing like a real man would.”
“You are a real man.” She got off him. “And we can dance the regular way right here.”
He got a paper towel off the table and dabbed his eyes. “What are you talking about?”
She went across to the living room and turned on the stereo in the entertainment system.
“Okay, let’s find something good.” She stopped on her favorite station that played old-school slow jams. The sultry beginning of Aaliyah’s “Rock the Boat” began. “Uh-huh.” Lisa bobbed her head. “That’s what I’m talking about.” She shimmied back into the kitchen.
“I love this song.” Jake tossed the paper towel on the table.
Lisa stood in front of him and held out her hands. “May I have this dance?”
“What?” he whispered.
She bent down. “You said you wanted to dance the real way. Let’s dance the real way.”
“You know my legs are too weak.”
She took his hands. “Then lean on me.”
He took a deep breath and slowly rose from the chair. “Oh.”
“It’s okay.” She put her arms around him. “I got you.”
He stood straight and put his weight on Lisa. “I’m six three and two hundred pounds.” He leaned on her. “I’m gonna crush you.”
“I’m stronger than you think.” She laid her head on his chest. “Just take it slow and relax.”
He stumbled a bit then picked up his feet in perfect rhythm.
“Wow.” Lisa held him tighter. “You’re a smooth dancer, Jake.”
His lips brushed her cheek. “This feels amazing.” He swayed. “Just like the old days.”
“See?” She moved her hand up his back. “Now you’re leading.” She lifted her head. “How does it feel?”
“I…” His voice cracked. “I haven’t danced since two thousand eight.”
“Well, you’re dancing now.” She kissed him. “And you’re doing it beautifully.”
[Order your copy of Captivated TODAY!]
|||||||
About Stacy-Deanne
Stacy-Deanne (Dee-Anne) is a published novelist of interracial romantic suspense and mystery novels. She started writing professionally in 1997 when she was nineteen years old. Stacy grew up loving the suspense genre. Her idols are Edgar Allan Poe and Alfred Hitchcock. Her love for Psycho and many of Hitchcock’s movies fueled her fire for suspense.
She was born, raised, and resides in Houston, Texas.
If you ask Stacy-Deanne about her dream cast for Captivated, she’ll tell you that she sees Nia Long as Lisa, Ryan Phillippe as Jake, and Christian Bale as Winston!
Learn more about Stacy-Deanne and her literary works at the following online outlets: [Website] [Mailing List] [Facebook] [Twitter]
FYI: A little birdie told me that Disturbed (Book 3) is due out NEXT month: April 12, 2014! Be on the lookout!