If you missed Tyra Banks on her show last week, then you missed a few minutes that totally put Tyra in the “like” category, at least for me. It’s not that I didn’t like her; more to the fact that I was indifferent; I never thought enough about her to have an opinion. Well, she changed that, and for the most part, I have the media to thank.

You see, once upon a time, Tyra Banks looked like this: 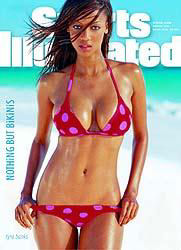 Hot, right? Well, she was a freaking super model; it’s what she got paid to look like. Well, since Ms. Banks has left modeling for other entertainment pastures, she has put on some weight, and if that wasn’t bad enough, she had the nerve to go on holiday in Australia and wear a bathing suit in public! Lordy, lordy, the media grabbed up on this like there was no tomorrow and put the picture and ignorant headlines like “Thigh-ra Banks,” “America’s Next Top Waddle,” and “Tyra Porkchops” all over magazines and entertainment TV programs.

Tyra promptly went onto her show with said bathing suit on… 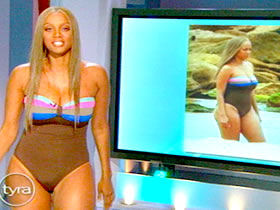 (Is it me, or does Tyra look shorter, stumpier in that photo on the TV, like they scrunched it to make her look bigger, wider?) 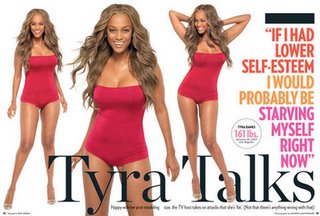 On her show, she put the media on GHETTO GIRL BLAST. She is a girl who always had a little extra junk in her trunk, and she is a girl whom a lot of little girls look up to. They have always loved the positive image and messages that Banks had in regards to weight, looks, and self-esteem. At the end of her well-deserved (for the media) tirade, Banks finished, with tears in her eyes and a lump in her throat, with this line, “I have one thing to say to you: kiss my fat ass!”

BIG UPS for Tyra for standing her ground and for being that for all the young women of the world.

Anybody who has read my blog, especially in the beginning, knows that I have a huge issue with a lot of media. They perpetuate stereotypes, create new stereotypes, and foster often a negative view of things (like weight) that gets passed down to society.

I know a lot of women who would give their right arm (with the big wiggle) to look like Tyra does now, and the sad thing (well one of them) is no woman…or man should want to want to look like somebody else. Everybody should be able to feel happy in the skin he or she is in. It’s sad that Jennifer Hudson is known as much for her weight as she is for how well she can blow and act. Same for America Ferrera (from the ABC show “Ugly Betty”). It’s deplorable that little girls, who looked up to Tyra Banks, get to see people call her fat and ugly and make fun of her. What kind of messages will that send to those girls?

As long as someone is healthy (always, ALWAYS important) and happy, whose business is it if the person has put on 30, 20, or 10 pounds (some of them models need more than a donut to get up to the weight they should be at)? I don’t believe being a celebrity means one can expect to have his or her whole life dissected like a cadaver on a cold, steel slab, and I don’t believe that the regular person (us non-celebrities) should have to have media’s “rules” on perfection shoved down his or her throat.

I know some might say that if you have a good self-esteem, why worry, or that it doesn’t bother them, but think outside of yourself for a minute. Most of the time, I watch or read entertainment things merely to be entertained and to argue and what they are doing wrong – lol; however, I do think beyond me. I think about society as a whole, about the little girls who starve themselves to be thin and pretty, about that black girl who has to have the extensions to have flowing, free locks to be pretty, or the little boy who thinks he has to act thugged out in order to be a real man. All of that, and more concern me–I think, to be a person in this world, in a world that seems to like pushing MAN down at every turn, it’s important for every person to think outside of him or her self.