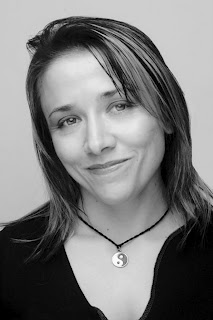 Cynthia Vespia, “The Original Cyn,” has a background as a certified personal trainer; licensed private security guard; award winning video editor, and graphic designer. But the allure of writing has always remained her first love.

As a skilled wordsmith she established a successful career as a journalist and promotional writer. Throughout that time she remained true to her pursuit of writing novels, a passion she’s held since she was a very young.

Today Cynthia writes quality, character driven novels full of suspense as well as dark fantasy. With a plot pace to stir the adrenaline and keep the pages turning, Cynthia likes to refer to her novels as “Real life situations that you could find yourself in but hope to God you never do.” In her spare time she enjoys reading, movies that involve a strong plot/characters, and keeping active through various forms of martial arts and as an active fitness competitor.

Where does your passion for writing come from?
I love reading first and foremost, and that translated into a love of writing. The art of creating worlds and characters is very freeing, seductive, and delicious.

If your passion for writing was a color, what color would it be and why?
I could say its “shades of gray” …no pun intended! I could say my writing encompasses all the colors of the rainbow due to the varied emotions, genres, and stories. But I see a purpleish hue. Dark, intense, but not so dark as it is black. Purple = passion. 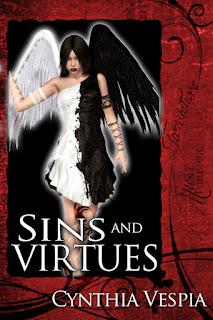 [Buy your copy of Sins and Virtues today from Amazon and S&V‘s publisher!]

Fantasy novelist Ben Haskins has taken a remote cabin in the wilderness to revive his shaky marriage and failing career. Within the peaceful surroundings he runs into real trouble when convicted murderer Sam Mitchell breaks into the cabin after she escapes from prison. Marked by a dark past of abuse Sam is volatile and ready to snap. It is up to Ben to use his writer’s gift of words to diffuse the situation before time runs out for them both.
Excerpt from Sins and Virtues

Ben brought up his hands to signify he was not hostile, but before he could speak the woman made a surprising move.  She dashed backwards and slipped a long knife from the wood block that stood on the counter.  By chance or choice she’d yielded the butcher knife.  Its large, flat edge gleamed from a spot of yellow sunlight breaking through the kitchen window as its master twisted it in her grip.

Now Ben was certain there was trouble.  She could be unstable from a mental disorder, or drug abuse.  Either way, she was now armed and double the threat.

Ben wasn’t about to take any chances with his life, woman or man.  He had a family to support, a son to watch grow into a man.

His most logical decision now would be to bring the odds decidedly back to his favor.  The mental image of the .12 gauge shotgun, flawlessly polished and resting inside the tomb of the foyer closet, sprung to mind.

The woman was about five feet in front of him, clutching the knife tightly in her right hand.  Her eyes were steely and locked onto Ben’s every move.  The lines of her body were contoured into an athletic looking frame, poised and ready to strike.  She could be on him like a jungle cat, stealthy and quick, that he was well aware of.

The pulsing of his heart grew rapid and his adrenaline surmounted once again.  But unlike the level attained in the weight room, it was now at a pace he could not voluntarily control.  His shirt was pasted to his skin, clinging and delivering a feeling of constriction to his chest.

He wondered if he should speak, say something to let her know he wasn’t a threat to her. But in the back of his mind he wanted nothing more than to be out of harm’s way. Hoping to gain positive ground by using an obstacle as interference, Ben knocked over one of the chairs from the wicker dining set.  Turning on heel he made a swift vault for the closet where the shotgun was located.

As he reached the handle to the door he looked back just in time to see the woman hurdle the chair with ease.  Stunned at her athleticism he fumbled for the shotgun, unable and unwilling to take his eyes off of her.

Rather than pursue him, she stopped at her landing with a soft pad of her feet and marked him in her sights.  She flipped the knife around to grasp its steel edge and launched it through the air with precision.

Ben tipped back just in time to narrowly avoid being struck in the face by the airborne blade.  Instead, it grazed his left ear and temple as he fell ass backwards to the hardwood floor.  His hand instinctively shot up to attend to the sudden coarse burning that spread out over his damaged flesh.

In mere seconds the woman was across the room and upon him.  Ben had been on target about her cat-like quickness.  A solid, brutal heel strike landed squarely upon his groin.  Before he could even wail out in pain another kick caught him flush under the chin, gnashing his teeth together, almost severing his tongue.

Sparks of blackness rattled his vision.  His body was overloaded with pain and dizziness soon followed.  Regaining his bearings Ben thought for a moment he was dreaming.  As his vision cleared he realized he was in a very real and waking nightmare. The woman stood above him, the barrel of the shotgun aimed at his chest.