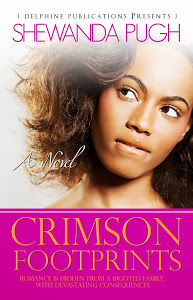 When an insecure woman begins a cloak-and-dagger love affair with a Japanese American man, she is intent on keeping her bigoted family in the dark albeit with devastating consequences. On the night of her brother’s murder, Deena Hammond stumbles upon Takumi Tanaka, lost and on the wrong end of a .32. After rescuing him from the certain fate driving through the hood in a Porsche will bring, a sweet kind of friendship begins. A balm for her grief. Maybe, Deena likes to think, it happened the day her white mother killed her black father. Or maybe, it was always a part of them, like DNA gone bad. Whatever the case, Deena knows that her family would never approve, hell, never acknowledge her fast-growing love for Takumi. And had he never made love to her that way, in that unraveling, soul-searching sort of way, she could’ve done the same. But loves a devil that way. So, their game begins. One where they hide what they are from everyone. Anyone. And Tak understands this for now. After all, Deena’s career hinges on the favor of her mentor and boss, his hard-ass of a father. And the Hammond family is already stretched thin with grief. Yet, each step Deena takes toward family and career brings her closer to an acceptance shes never had. And away from him.

A Romance with Literary Bite

Shewanda Pugh’s Crimson Footprints is a beautiful story of angst, family, and love. From the very first sentence or two, I was brought into Pugh’s strong storytelling skills, her way of writing just the right words for the story, words that sound and feel right when read aloud, too. Character is often the big component of a story that keeps me reading. If there is a wonderful character, I want to see what happens to him or her. Pugh’s development of characters is wonderful. The main character, Deena… wow. Pugh deftly weaves a unique, deep, and intriguing character with Deena, using a complex host of characters to not only flesh out the overall story but to also develop Deena’s character. The delicate hand that Pugh uses to paint this story is one not often seen in a debut novel. It’s obvious that Pugh considered language, the sound and movement of it. Considered the complexities of life and how one tries to find happiness in the midst of sadness, grief, and heartache. Considered that even in happiness, there are still glimpses of sadness, grief, and heartache. She made me feel for her characters, made me become an active reader in the experience of seeing this story unfold. Can’t wait to jump into Part 2. 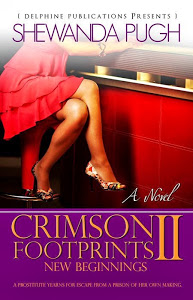 An eleven-year-old boy hitchhikes 1500 miles from Bismarck to Miami; a prostitute yearns for escape from a prison of her own making, and the horrible secrets of a long-ago murder are unraveled in the shadows of one woman’s dreams. Lizzie Hammond is an ill-fated whore that believes in little, save her own ultimate demise. Kenji Tanaka is a pseudo-architect, content to hide in the shadows of his family’s overwhelming success. Neither can stand the other. But the appearance of a boy only rumored to be true helps them discover that two unlikely halves can fit together as the perfect whole. For Lizzie Hammond and Kenji Tanaka, redemption is found in the most unlikely of places: each other, even as the world around them disintegrates.

You never know what to expect in life… and in books it appears. In Crimson Footprints II: New Beginnings, author Shewanda Pugh illustrates this very well. Many of the themes in this novel echo what I found in the first book: overcoming the past, dealing with family drama, building love in the family, developing self-worth. We get to see the further development and growth of characters we learned to love in book one, and we get to see this current story unfold on a character that probably left many readers cold in the first book: Lizzie. I have to admit, she was not my favorite character in the first book, and wasn’t in this book either, but Pugh’s ability to construct a character’s identity so that we see a living, breathing person full of flaws and dreams and desires makes you want to see a change come for that character. I had that for Lizzie… and for Kenji, another major player in the story. This is a strong story, a great follow-up to Part 1. I still favor Part 1; that first paragraph hooked me so in that book! Having finished Part 2, I’m left wondering what treats Pugh will bring to readers in her next work.