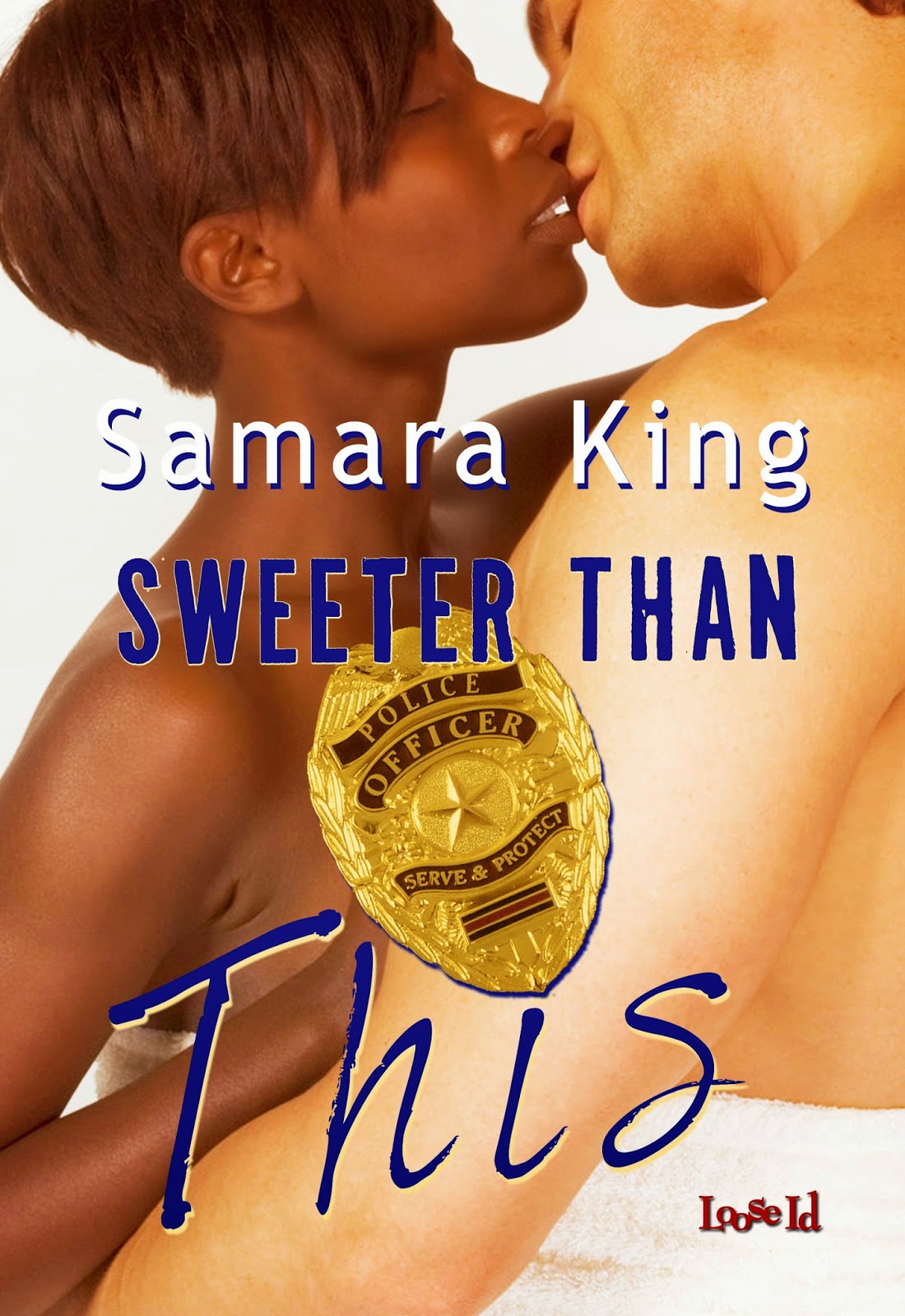 With her best friend murdered, the man believed to be partly responsible under the nose of her gun and a stranger looming in the shadows out for blood, Officer Elle Taylor is running out of time and people to trust. Will Elle risk crossing the line between attraction and revenge to take help from an unexpected source before the murderer strikes again and leaves her life in flames?

Durant Kane is no stranger to trouble, especially the kind that comes with a gun trained on his face and an angry woman attached. But Elle’s something different, something unexpected and sweeter. He never could have imagined coming to feel so deeply about her, even if his own disastrous path in relationships hadn’t left him so wary. But he’ll have to take the risk if he doesn’t want to lose the woman he’s come to realize he can’t even think of living without.

Sweeter Than This is available at Loose Id, All Romance, and Amazon!
EXCERPT (R-Rated)

Everyone had a guilty pleasure. Some gave in once and could walk away afterward. Others became a slave to it. Given the wicked spasms pulsating between Officer Elisha “Elle” Taylor’s thighs, the deciding factor of which side she fell on was clear.

Seeing Durant Kane again cracked open her wall of defense. Elle gritted her teeth as she waited on her coffee. Her usual early morning joint was filled with commuters and the normal hum of conversations and steady traffic. Her gaze traveled slowly over the handsome man standing at the entrance of the diner. His golden skin, brilliant blue eyes hinting at wise-cracking cynicism, and cropped blond hair gave him the air of a playboy. Sophistication and confidence defined every move he made.

The shrewd gleam Elle knew oh so well in his baby blues matched his smooth-talking ways. Although it hadn’t taken much talking for her to end up in his bed. The dark designer suit lined his tall, muscular frame with contemporary style, as did the black, quarter-length coat he was shrugging out of. She noted that same potency registered with several of the men Durant stood with as he gazed occasionally at traffic. They seemed intent on his every word. She was addicted to him in all the ways that shouldn’t matter to a cop, but as a full-blooded woman–that was a different story.

Elle turned to him just as Durant looked in her direction, a slow smile tugging at the corner of his lips. She faced the counter. Where the hell is that coffee? She needed to be on the road, and not recounting the ways he’d made her come a year ago. Knowing he still had the ability to captivate her attention made her blood boil. Lines had been crossed, dotted, and underlined in Durant’s company.

Guilty pleasures… Elle knew of them; she was experiencing one right now. The swipe of his tongue across his lips made her stomach clench. She balled her fist. Moments later, she felt the brush of his hand graze her lower back. She didn’t dare turn around, and with the steady stream of people roaming the diner, no one would notice that Durant was standing inappropriately close behind her. The heat from his breath fanned the back of her neck.

“Excuse me, Officer. So rude of me to reach over you.” He leaned forward, grabbing a menu.

“I should shoot you.”

She could hear the smile in Durant’s whispering voice. “A pleasure to see you as well, Elle.”

She raised her eyebrows, despite the sexual intensity spreading throughout her body. “I doubt your associates would see it that way.”

Durant chuckled. “That’s why they’re waiting outside.” The sound of his laughter was rich and filling, just as he’d been when their bodies had intertwined.

Elle squeezed her thighs, standing stiffly. “Perfect, a henchman who does delivery.”

“I try to be as accommodating as possible to my employees and otherwise.”

Elle grunted. “Is that what you’re calling it these days?”

“There are many names I have for what I want to do to you.” He moved closer, the hard muscles of his chest pressed against her back. An innocent onlooker would only see a man perusing the menu and not the sensual heat ricocheting between them.

Durant snaked his right hand to the side of her waist, over her belly, and tugged her backward. Her ass brushed his erection. “What’s good here?” he said against her ear, inhaling her scent.

“Get your hands off me.” Elle’s eyes fluttered for a moment before she pushed away, only to feel his hand clamp tightly against her. Her body responded swiftly, and her clit quivered wildly. She bit her lip to stop from moaning out loud. She wouldn’t give him the satisfaction. “Damn you! If I scream–”

“If you scream, it’ll be a sound I’ve been longing to hear,” he replied huskily.

“Officer? Your coffee. We threw in a couple of chocolate glazed donuts for the wait.”

Durant edged back, pretending to be intent on the menu.

Elle jerked away from his intimate lock and turned her attention to the cashier, flashing a smile. “Thanks.” The caffeine would do little to smooth over the tumultuous emotions rumbling within her.

She turned to find Durant’s eyes glowing. “If you ever try something like that again, I will shoot you, Kane.” She maneuvered around him, wanting to put as much distance between them as possible.

He looked over his shoulder. “You never told me what was good.”

“I would think the fact that you are still standing.”

Once outside, Elle closed her eyes. The cold winter air drowned out the heated vibrations and her frayed nerves. Fortunately it was the end of her shift. The attraction she’d felt for him hadn’t gone any damn place. The realization slapped her firmly upside her head.

Did you really think it would go away?

It was not normal to feel like this, to act like some wanton teenager. It was definitely not her customary “love ’em and leave ’em before attachments could be made” style. She had stayed away from Durant since that night. Being around him clouded her judgment. Yet his heated gaze had reeled Elle in, reawakening a forbidden desire that not only threatened her sanity but her job.

He stoked something deep within her, a fire she hadn’t yet learned to tame. The tremors coursing through her body must be payback for the dormancy. There was a higher price to be paid if she gave in to her cravings. The forbidden truth was she’d never felt more alive.

Elle opened the door to her cruiser. They lived in two separate worlds, and nothing would change that. Sleeping with the enemy was dangerous; none of her training had prepared her for a skilled criminal like Durant Kane.

“Hello, Honey,” a digitized voice whispered into the receiver. “Or should I call you…Mother?”

Alaina Taylor frowned in confusion at the mention of her old nickname. “Who is this?” It wasn’t her daughter, Elisha. Her only child would not play on the phone. Her hand tightened around the cord. At the caller’s silence, Alaina asked again, “I said, who’s calling?”

A chill swept through Alaina’s body at the venom in the stranger’s voice. “I don’t have time for your foolishness.” Her heartbeat sped up. It couldn’t be, she thought. No, this is someone’s sick idea of a joke and nothing more. After all this time, she refused to think there was any other possibility. That life was dead. Gone. She couldn’t relive that pain. Never again.

“Whoever this is, you have the wrong number. Do not call here again.” Alaina started to hang up, but the laughter on the other end stopped her.

“You think it’s that easy, bitch? You ruined my life.”

“Game? I guess you could put it that way. You certainly played with my life.”

“I told you, I don’t know what you’re talking about. Why are you doing this? I’m hanging up–”

“No! You listen very carefully, Honey. You may not know me, but you will. I’ll make sure of it. You are not the victim, though you play that role so well. I’m the one you threw away like garbage.”

Alaina closed her eyes as a wave of nausea hit her. “I-I had no choice. I tried to do the best I could.” The words came out in a hoarse whisper. “Do not try to find me. Do you hear me?”

“Now that sounded mother-like, very authoritative, but there’s not a damn thing you can do to stop me, now is there, old woman?”

SN: Over at The Blood-Red Pencil, Samara is featured for BRP’s month (Feb. 2014) of romance (and all aspects of it) and writing. There, she talks about how she comes to the page to write sex scenes, how she considers her characters and stories when writing sex scenes, and what writers should do to develop strong sex scenes in their stories. 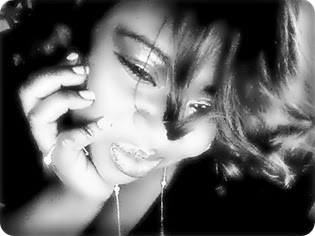 Samara King is the author of eighteen multi-genre works within romance fiction in novel and novella lengths as well as poetry. Writing romance has been a part of Samara’s world since her days of sneaking to the back of the library in grade school with a love story in tow; soon after, she wrote her own.

She was a Poet of the Year nominee in 2011 by African Americans on the Move Book Club and is a current member of The Romance Writers of America, several sister RWA chapters, and Sisters In Crime. Samara has penned stories for Totally Bound, Cobblestone Press, Loose Id, sexy mobile reads for Ether Books, and also writes under her co-produced self-publishing entity, Crimson Whispers with author Shonell Bacon.

Samara previously co-hosted SoundNOff, a poetic format for poets and spoken word artists and hosted InCharacterN10, a former showcase for authors on Blogtalkradio.com/samaraking. Her newest endeavor is On The Hush, a monthly book column at MsNixInTheMix.com that focuses on relational issues. Samara’s first poetry collection, The Ebony Kryptonite, was well received and was followed with Stripped Barefoot, a sultry mix of poetry and spoken word, which went on to reach #20 in Chicago’s Top 40 on Reverbnation in September 2013. Her next poetic endeavor, The Naked The Bare is slotted for late 2014. To find out more about Samara’s poetry visit: http://reverbnation.com/samaraking or listeners may also find her on Spotify.

Currently, Samara is hard at work on her next romance series, as well as a new co-written mystery, Mama Has A Brand New Bag.