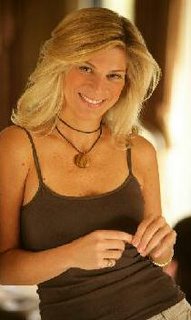 Oh, if only I did write porn, my husband would be one thrilled guy. But, as far as switching from adult to the teen world, it was the only thing to do for my sanity. After writing three adult books in a row, I was ready to hang up the laptop and call it quits. Then I had an idea for a teen story, and it was like the clouds cleared and the sun shone through. Writing was fun again! I wrote a story that I would have wanted to read as a teen, a story about a girl who is smart and has her act together and her life meticulously planned out – not some whiney girl who doesn’t know what she wants. I didn’t wander the halls of local high schools, but I did talk to the little girls I used to babysit in college – who are now all of 19 and 17 years old. I love my main character, Vanessa. The book was an absolute joy to write, and reminded me why I sit at a laptop getting carpal tunnel every day.

I see you’re a participant in the 2005 NanoWrimo. What made you jump aboard this crazy ship of writing?

It’s called a looming deadline and 1k words written. I needed a kick in the ass, and some other writer friends of mine suggested I give it a try. Of course, instead of writing I’m answering your questions instead, so I’m not sure how well it’s working. What it did do was free me up from the internal editor – I could work on the first chapter of a book forever, and that’s not exactly conducive to finishing, now is it? Now I’m just writing, not worrying about every word or sentence. It’s nice, but kind of like making a mess in a room you know you’ll have to clean up later.

Can you tell us a bit about what you’re working on for NanoWrimo?

It doesn’t have a name yet, but it’s my second teen book. It’s about a group of girls who decide to write a handbook that teaches guys how to treat girls – pretty much points out all their flaws and how to correct them. Of course, it’s not that easy. They also set out to prove their handbook works by testing it out on a guinea pig without his knowledge. And there’s a huge twist along the way, because nothing ever works out as planned, does it?

Is there one book out there (not written by you) that you love so much you wish you had penned it?

I always read sentences in books and think, “Damn, I wish I’d thought of that.” Some books I wish I’d written: THE WOMEN’S ROOM by Marilyn French, a book that I read in high school my senior year and pretty much jaded me for the rest of my life. I even wrote my college essay on it. Just an amazing book that spans decades and is so rich and bleak at the same time. Not for the faint of heart looking for a happy ending. THE AWAKENING by Kate Chopin, see above, only set the story back a hundred years. CROSSING TO SAFETY by Wallace Stegner, this is where I admit that I don’t usually read books written by men – not because I’m insane, but because I figure there are enough people out there reading them. I read this seven years ago and was captivated, loved it. A story about two couples and their friendship over the course of their lives. It also takes place in , where I’m from, so it holds a special place in my heart. I also love Adele Parks’ PLAYING AWAY, a great story about infidelity that’s just fun (yes, infidelity can be fun in the hands of the right writers).

What are your inspirations for writing?

Deadlines and fear of failure. They keep me going and keep me up at night. Otherwise, I’m someone who just enjoys real life. I’m not into fantasy or science fiction or even mystery. I think that basic every day things and experiences are fascinating, so even the most mundane thing can inspire me.

Check out Jennifer’s goings on at her website, http://www.jenniferoconnell.com!