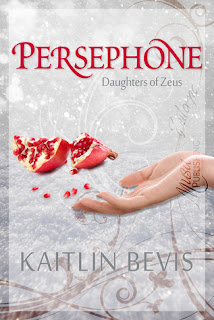 [Order Persephone today at Amazon, BN.com, and the publisher’s Website!]

There are worse things than death, worse people too.

The “talk” was bad enough, but how many teens get told that they’re a goddess? When her mom tells her, Persephone is sure her mother has lost her mind. It isn’t until Boreas, the god of winter, tries to abduct her that she realizes her mother was telling the truth. Hades rescues her, and in order to safely bring Persephone to the Underworld, he marks her as his bride. But Boreas will stop at nothing to get Persephone.

Despite her growing feelings for Hades, Persephone wants to return to the living realm. Persephone must find a way to defeat Boreas and reclaim her life.


Sometimes, you just want to be entertained, and Kaitlin Bevis delivers much entertainment in book one of her Daughters of Zeus series, Persephone. Bevis immediately sets us up with a great character in Persephone. Persephone, a high schooler who deals with all the insecurities that comes with being a girl in high school, learns that she comes with something a bit more different from all the other girls: she’s a goddess. I enjoyed seeing Persephone move in her real-life spaces and dealing with things, such as the cute guy being interested in her, and the jealous girls hating on her, and her–being so beautiful and hated on–not really seeing her true beauty and worth. Seeing this same girl then having to realize the truth of her goddess status and the consequences of that status makes Persephone even more appealing as a character. If you are a fan of the Greek myth of Persephone and Hades, or of Greek myths in general, I think you will appreciate this modern retelling. Bevis provides great characters, strong description, and a vivid imagination throughout this novel. Definitely engaged me enough to head straight to the next book, Daughter of the Earth and Sky.