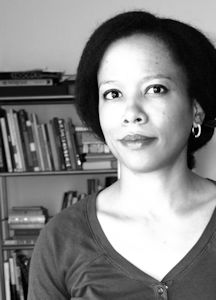 Holley Trent is a Carolina girl gone West. Raised in rural coastal North Carolina, she has Southern sensibilities but her adventurous spirit drove her to Colorado for new experiences.

She’s a member of RWA and Colorado Romance Writers. She honed her critical reading skills at the University of North Carolina at Chapel Hill’s English department, but learned to tell a story from her big sister whose fantastic fibs during childhood left Holley agape and agog.

Where does your passion for writing come from?
My drive is fueled mostly by an overactive imagination and a lack of a better outlet to get all those ideas swimming around in my head out and analyzed. When I don’t write as part of my daily routine, I ruminate a lot. I stress a lot. I think too much. I get anxious. Writing fiction is how I make sense of all those bits and pieces my muses (and my demons) pile on me. I’m much happier for it.

If your passion for writing was a color, what color would it be and why?
I suppose it’d be gray. Gray is one of those colors in nature you don’t pay a lot of attention to. Sometimes gray indicates an absence of life or even stagnancy. Other times it means camouflage. If you look closely at gray, though, you see that sometimes gray is blue and brown and red and yellow all speckled together. That’s how my stories are. Sometimes they seem to be one thing on the surface, but if you read carefully, you see how rich even a simple story can be (at least, I HOPE).

How do you keep the passion burning in your relationship with storytelling?
Sometimes I step back from my scheduled writing and throw in a story that came to me out of nowhere. I try to write books in a certain order so my releases at each publisher are staggered and there’s not a big gap between sequential titles in a series. That means sometimes I have to start a new novel every month. Ever now and then, inspiration smacks me. I might be driving to a meeting, pushing a cart in the grocery store, or chopping vegetables for dinner, and something will gnaw at me, find a way in, and morph into a bigger concept.

That’s where my most recent project idea came from. I was on the highway, staring at the mountains on the Front Range (I live in Colorado), and my mind drifted to a recent road trip where we ended up traveling on an unpaved Wyoming county road for about forty minutes. I got to see a bit of the country I wouldn’t have otherwise, and it gave me a setting to play with. The characters hopped on for the ride next.

So, that piece jumped my queue and I’m working with it ahead of some projects I really wanted to get out first, but sometimes I’ve got to break my own rules and keep my muses happy. 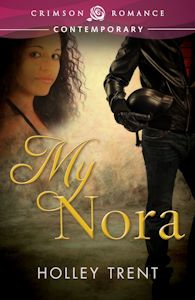 [Buy your copy of My Nora today from one of the following locations: Amazon, iTunes, and All Romance eBooks!]

When painter Manora Fredrickson left Baltimore for a fixer-upper located in her ancestral Tyner, North Carolina, she figured she’d be getting away from the distractions of the city: the noise, the crime, the event invitations…her ex-husband. Happy to be a recluse at age twenty-eight, all Nora wants to do is paint, lick her wounds, and maybe sneak across the county line for some of Hattie’s artery-clogging fried chicken.

Enter Matthew Vogel. His little piece of Tyner abuts Nora’s and from the moment the consummate bachelor stops by her barn to find her dancing around like a Jersey City showgirl, he decides the spunky firecracker is the woman for him. Nora doesn’t agree, but she can’t get the brawny fisherman off her mind or her doorstep.

As much as Nora is attracted to her charming neighbor, she thinks Matt deserves better than a curmudgeonly hermit. Her last marriage fell apart because of her commitment to her art. Matt wants to convince her it won’t happen again—not with him.

Excerpt from My Nora

She held up her index finger once again and said “Wait, let me guess.”

She paced around the broken tractor parts and empty steel oil drums, wringing her hands behind her back. “Well, you’re not dressed well enough to be a Jehovah’s Witness, and besides they normally do their proselytizing in pairs.”

Matt looked down at his typical autumn Saturday attire of a long-sleeved ringer tee, jeans, and much-abused brown harness boots. It wasn’t fancy, but it was typical Matt.

She continued, “You’re obviously not the mailman.” She poked her head outside the barn door just to verify her hunch. “Unless you can strap bags of mail and parcels onto that motorcycle. I’m expecting a package, by the way.”

“Okay.” She resumed her pacing. “You’re obviously not the guy I’ve been waiting on for two weeks to install my satellite dish so I can have Internet, huh?”

Matt shook his head once more, his hair settling into his eyes in the process. He flicked it away with annoyance. At the moment, the ends reached mid-neck. He knew his grandmother would have a fit if she ever saw it. He never had enough motivation for a haircut.

“Ah. Well, then you must be here to ask if you can hunt on my land.” She gave him what was obviously a disingenuous, practiced smile and propped her hoe against a rack containing various garden tools that were well past their prime.

Now it was Matt’s turn to raise an eyebrow. “Well, yeah.”

She sighed. “Well, you’re not the first.” She picked up a black yard waste bag and started tossing rusted bits of scrap metal and old yellowed newspapers into it. When it was half full of detritus she added, “And so you won’t be first I tell ‘no’.”

“No?” Matt asked with disbelief, taking a few automatic steps in her direction. “Why not? I’ve been hunting in those woods since I was old enough to hold a rifle.”

She put her hands on her hips and scowled at him. If she was trying to look ugly, she was failing miserably in Matt’s opinion. “Mr. —”

“Mr. Vogel. I put that sign up at the road not because I’m being picky about who hunts here or because I want to keep all those goddamned deer for myself.”

“I live in that house up there.” She pointed to the very obvious two-story farmhouse in the near distance for emphasis. “I moved here from a really shitty neighborhood in Baltimore where I had my front windows shot out not once, but twice. I wasn’t even who they were aiming at.” She stopped pointing and got up so close to Matt that their toes were nearly touching through their shoes. Matt sucked in some air. She smelled like hard work and something fruitier he couldn’t identify. She had a scent he wanted to roll around in. “I don’t want anyone on my property with a gun.”

Matt looked down into her piercing gaze and ground his teeth to fight off the smirk that was his longtime nervous tic. It wouldn’t do for her to think he was off his rocker during their first encounter. He didn’t even know her name and she’d lived on that property for several weeks.

“Mr. Vogel, did you hear anything I just said?”

Matt nodded slowly. “Yep. I heard you. No guns.”

“Good. I’m glad we understand each other.”

Oh, he understood her. “So, crossbows are okay? I’m not such a great shot with bow and arrow but my little sister has crackerjack aim.”

She just blinked those big brown eyes at him.

The very corners of her luscious lips twitched. That smile always worked on the ladies, but she was fighting hard. She squinted at him and crossed her arms over her chest. “You guess right.”
“Okay, Miss … well, you have me at the disadvantage here. I don’t even know your name.”

He waited for her to offer her first name, but when she just stood there glaring up at him with her lips pressed tightly together, he gave up on it. “Miss Fredrickson —”

Matt looked down at her ring finger and found it empty. “Okay. Ms. Fredrickson, our parcel of land abuts yours on the back border. We can try to stay on our side of the property line, but sometimes when you’re stalking a buck you lose track of where are. If you could just give us permission to hunt over here, we’ll try not to abuse it.”

“You’d better do more than just try to stay off my property, Mr. Vogel,” she hissed, eyes going to narrow slits and voice dropping about half an octave.

Matt thought the woman seemed extremely uptight and that he could probably fix that little problem for her with a couple of hours and a soft bed. Hell, he could probably do without the bed. It’d been a long time. He was a big guy. They could probably do it standing with no sweat off his back. He thought she looked like a screamer and chuckled at the thought.

“Do we have an understanding?”

“Oh. Sure thing,” he said, smiling wider so his dimples showed.

She didn’t look convinced, but unclenched her jaw and unfolded her arms all the same. “I imagine I don’t need to show you the way out, then.”

“No, ma’am. I can find my way to the road plenty by myself.”

“All right,” Matt said in a singsong voice, crossing through the open doors into the late-day sunshine and clasping his large hands behind his back. “Just holler if you fall again and need some help getting up.”