Nine years ago, Alisa Valdes’ debut novel, The Dirty Girls Social Club, had people wondering if she was “The Latina Terry McMillan.” The novel, about the loves and lives of six eclectic friends in their late twenties, not only garnered media attention, but it also became a New York Times bestseller. 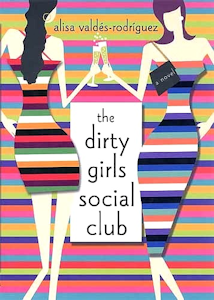 Now, Valdes is moving to bring her bestselling novel to the BIG SCREEN… and you can help! Through Fundly.com, Valdes has kicked off a campaign to raise funds for a Dirty Girls movie. When talking about the book on Fundly, Valdes says, “I wrote the book I wanted to read but couldn’t find.” It was also the first book to explore the racial and socioeconomic diversity of Latinos in America that the mainstream completely ignores, with a black Colombian character, a blonde Cuban Jewish character, etc. — and that, says the author, was the key to its success. “The book showed us as we truly are – multifaceted, complex, fully human – not as the dominant culture fantasizes us to be,” she says.

With such a hot property like Dirty Girls, there were plenty of opportunities to bring the novel to the big or small screen, and at Fundly, you can read about those experiences and what has led Valdes to now pursue securing funds to make the movie herself.

When I asked Valdes what it would mean to have this campaign funded, COMMUNITY was a keyword for her: “We are looking to raise a small portion of our budget through crowdfunding. If we can do it, emotionally it will mean that we have the support of the community. Community is important to me.”

If you loved the novel and would love even more to see the movie version, fund this campaign today! If you want to support an endeavor that would spotlight positive images of Latinas, then help fund this campaign! Be sure to watch the comical (yet painfully truthful) and entertaining video at the campaign site!

Like Valdes, I, too, believe in community. It takes a community to raise an indie talent. Support this one today!