One of my favorite authors is Tananarive Due. Her biggest fan is my sister. I’d put a bet on that. My sister has read and reread Due’s books as if she’s writing a dissertation on Due. Whenever a new one drops, she’s big-eyed, excited, and on her way to a bookstore or online to buy.

The minute I learned that Tananarive, along with her husband Steven Barnes, had started a fundraising campaign for their short horror film Danger Word, I knew I wanted to put a shout out to the blogosphere in the hopes that people would hear this news and jump on board to support the project.

If you don’t know Tananarive Due (and I’ll try not to hold that against you), let me give you the skinny. She’s an American Book Award winner and the author of the bestseller My Soul to Keep (my fave book of hers!). Her husband, Steven Barnes, has his truckload of talent as well, having written for several major TV science fiction series in the past 20 years to include The Outer Limits, The New Twilight Zone, and Andromeda. 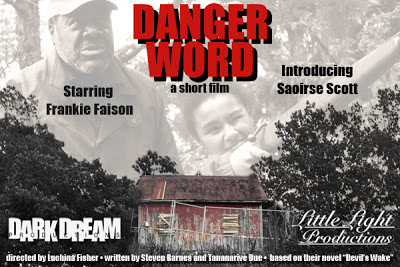 Their short film Danger Word tells the powerful story of a 13-year-old girl and her grandfather who have survived the zombie plague in his wooded cabin—and how her birthday outing goes badly awry. It’s a story about love and survival that empowers young girls.

A cool thing about this project? There are already 200 backers, including Hollywood insiders.

The Indiegogo fundraising campaign, which ends on July 29, 2013, would assist Due and Barnes on finishing post-production. 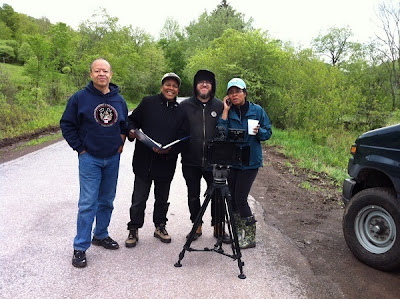 I asked Tananarive what it would mean to her to have this campaign fully funded, and her final response echoed that of author Liz DeJesus, who talked about dream fulfillment when asked about her fundraising campaign. Tananarive said

Aside from a few short scenes Steve and I wrote for a book trailer for FROM CAPE TOWN WITH LOVE with Blair Underwood, I have never seen my work translated to screen. I love movies, and I took up screenwriting in Los Angeles with the hope of seeing one of my book adaptations produced, but it hasn’t happened so far. The idea to write our own movie came like a lightning bolt, and it has been one of the most liberating experiences of my life. The trailer is the only footage I’ve seen so far, and even that short snippet is so thrilling! I know there are other fans out there who would like to see the movies I want to see, and it’s a dream come true to make those stories come to life on the screen.

You know, being a bestseller, being an award winner, being a successful writer does not mean you will always get a YES to projects you want to develop, projects you feel need to be developed. Sometimes, you can’t wait for the YES of others; you have to make your own YES and work to build your dreams into realities. That’s what this fundraising campaign does, just as it is doing for both writer, director J.D. Walker and author Liz DeJesus.

But even as you make your own YES, community love and involvement are important. It takes a community to raise an indie talent. Support this Indiegogo project from Tananarive Due and Steven Barnes today! While there, DEFINITELY take in the fantastic video that features Due and Barnes, the director Luchina Fisher, and the fantastic trailer to Danger Word.