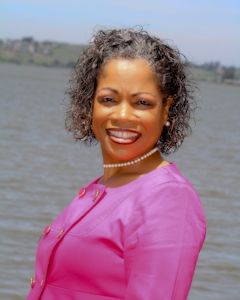 Hadassah Thomas Martin is a high-spirited woman of faith who was born in Los Angeles and raised in the San Francisco Bay Area. She trained with Precept Ministries and became a certified trainer in “How to study the Bible”. She is also an active member of the Fellowship of International Christian Word Of Faith Ministries (FICWFM). She is the founder of “Keep It Real Ministries” which is a non-profit organization whose mission is to conduct local bible studies which teach people how to continuously live in the reality of God’s Word; regardless of their experience.

Being an “at risk youth” herself, Hadassah has overcome insurmountable obstacles. She is a bright light to women who have suffered abuse and a vital assistant in producing overcomers.

She has a passion for people and teaches youth, men and woman how to fight to win!
As a true worshipper and Intercessor, she boldly believes that NOTHING is too hard for God!

In spite of the multiple challenges we face, she believes the greatness which is inside us all, can be extracted, developed and targeted to reach its designed purpose.
Her Focus: to express qualities that bring inspiration to others. Her motto is “We Always Triumph!”

Her inspiring influence, and her down to earth, “Keep It Real” style are certain to leave an indelible impression.

You can learn more about Hadassah at her Website! You can also e-mail her at hadassah@hadassahinspires.com if you wish to talk to her! 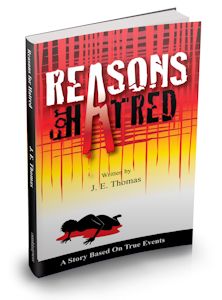 This a story based on true events. It’s about two best friends who were separated during their childhood. The spotlight then zooms in on Hadassah; during their adult reunion, she divulges the painful moments of the sexual abuse, murder and death that occurred in her life during her adolescence. It is a story about an ordinary person faced with extraordinary trauma and how she came to forgive and learned to embrace wholeness
Excerpt from Reasons for Hatred

While visiting with my grandmother, I had some sort of a breakdown. It happened without any warning. My grandmother and I were sitting in the living room visiting and having a casual conversation, when all of a sudden and out of nowhere I began to cry uncontrollably. The crying escalated into an explosive display of hysteria. I was consciously aware of my behavior, but I couldn’t control or stop it.

“My grandmother walked over to where I was sitting. With deep concern in her voice, she called my name. ‘Hadassah, Hadassah, honey, what’s wrong?’

“I could hear her, but I couldn’t respond. I kept shaking and crying hysterically. It seemed like it went on for a while. My grandmother continued to call my name as she gently rubbed my face and hands. She urgently kept asking, ‘What is it, baby? What’s wrong?’

“I don’t know how long it was, but at some point the rivers of tears eventually slowed down to a trickle and then to whimpers, and my sanity resurfaced.

“I was then able to respond to her, but this time, rather than exclaiming the usual lie that I had previously told so many others, I ended up spilling my guts and telling her the truth. I wasn’t okay. I told her every detail of every rape and beating that I had encountered.

“My grandmother peered into my eyes in shock and disbelief at what I had been going through. With tears in her eyes, she said, ‘Oh, no, baby, I didn’t know you’d been going through all of that.’ My grandmother lifted me from out of the chair, grabbed me, and held me tight. ‘I’m so sorry. I didn’t know all that was going on over there,’ she empathetically said as she cried.

“That’s when I knew that my grandmother really loved me. I told her that K. C. threatened to kill me, my mother, and her, if I told anyone. I begged her to promise me that she would not say anything. I guess she agreed and promised, because I was so frantic and disturbed. She held me until I calmed down. Around this time, the phone rang. It was my mother calling to tell my grandmother that she and K. C. would be on their way as soon as K. C. finished his crap game. My grandmother told me to go and sit back down in the living room chair that was close to the front door. She said, ‘Sit right here, baby. You’re going to watch him die like a dog today.’ My grandmother went into her bedroom and got her gun. She unlocked both the front wooden and screen doors and then sat down in her seat at the head of the dining room table, which faced the front door. With tears in her eyes, she patiently sat waiting. I had never seen her look that way. I sat quietly in the chair feeling strangely relieved that I had told her, but I was also afraid, because I wasn’t sure what was going to take place next.